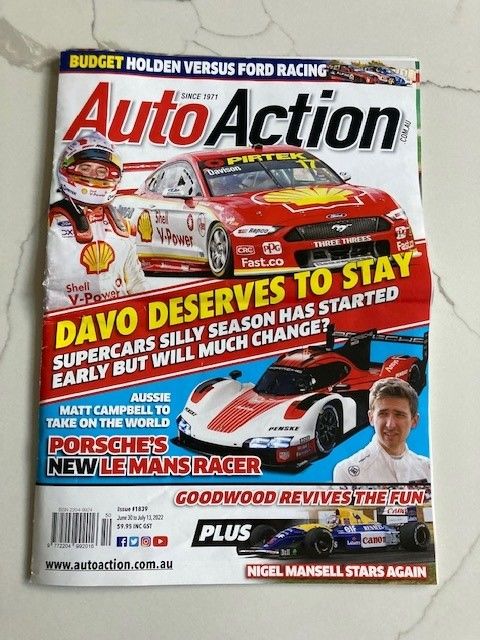 Motorsport Australia, as CAMS, tried to kill Formula Ford a few years back, but now it has a plan to return it to the fore.

Rejoice Australia, Formula Ford is not just back on the national agenda, it is set for a major revival with Motorsport Australia announcing the findings of its recent working party into the class.

Initially formed to determine if Formula Ford should become a national series again, and one that was confirmed, the working party morphed into the next phase and has now announced the future direction of the class's technical regulations.

The changes will include a larger engine and improved safety, with work continuing on exactly how those rules will appear.

The working party was led by Michael Smith, Motorsport Australia's director of motorsport and commercial operations.

In announcing the new rules, Smith said: "We're excited to be announcing this new generation of racers consider their careers and development opportunities in the years ahead.  "Likewise, we want current car owners to know they have a place to race their cars and that they be eligible to compete at a national level, alongside the new car.

With ongoing work on tying down the exact rules, Spectrum boss Mike Borland is hopeful of having clarity soon, so he can start work on the new car, which he said wouldn't happen if the regulations did not suit his business.  He has embraced the new safety features, including the halo device, front, rear and side-impact crash structures, an extractable seat, driver headrest, sidepods and wheel tethers, but say he needs to know more.

"There aren't any regulations yet, but we have had a bit to do with the technical group on deciding what to include", Borland told Auto Action.

"It is good that Motorsport Australia wants to work with Formula Ford again, and they've recognised how important it is, and at the same time trying to increase the safety requirements.  That is always a positive.

"To end up with what they want to end up with is not a simple thing.  Realistically, no one else has ever tried to do a halo devise on a space frame chassis, and we have tried to work them on how to do that".

He said safety is about where you decide to draw the line regarding the costs and benefits, but some things were now unavoidable.

"It is a balance of looking at how most of the accidents in Formula Ford have happened and what the result has been - then working through a priority list of what's essential for driver safety and what is optional.

"That is what we have been trying to do, bearing in mind we have a lot of experience and given we have cars here and everywhere, and we know historically what the damage has been over the years".

While he said the new safety features will cost money in the build and running costs.

"The gearboxes for the current cars are just about impossible to buy new at the moment and likewise the engines.  So, what they are trying to do will be cheaper in some ways.  You can buy the next spec gearbox for 2/3rds the cost of the ones required now".

Consultation remains ongoing with interested parties to ensure the new regulations work for the series, keeping in mind that stability is required so that the old cars can be competitive with the new vehicles, which has historically been as important as the running costs.

He expects Mygale from France will build a new car, as well as fellow Aussie Listec and speculation continues around the potential involvement of Tripe Eight given Jemory Moore's involvement in the working party.

I got into this for the competition and the competition side of it, and certainly with the working group we have been trying to keep the other potential manufactures involved so we can have that competition.  It comes down to each manufacturer to see if it is financially viable to be involved, and we hope that will be the case".

As for local Formula Ford Association; like Borland it remains positive pending the final regulations.

"The Formula Ford Association welcomes this initiative and is proud to be a part of ensuring Formula Ford continues to be the main development pathway for circuit racing in Australia,' Formula Ford Australia's Phil Marrinon said.

"Safety and cost control are always been the guiding principals of our Formula Ford rule book.  With the advanced safety features becoming more affordable the time is right to introduce them into our regulations.

"We are one of the few Formula car categories that encourages diverse manufacturer involvement, and our local constructors will be some of the first in the world to build tube frame chassis with these advanced safety features.

We look forward to working with Motorsport Australia to continue to foster not only Australia's next generation of driving talent, but helping train Australia's upcoming Motorsport engineers and mechanics, just as we have done for 50 years".

The working group for the new rules is headed by Smith.  It included Andrew Jones, Ryan McLeod, Jamie Augustine, Mike Borland and Jeromy Moore, with oversight from Ryan Story as chair of the Australian Motor Sport Committee.